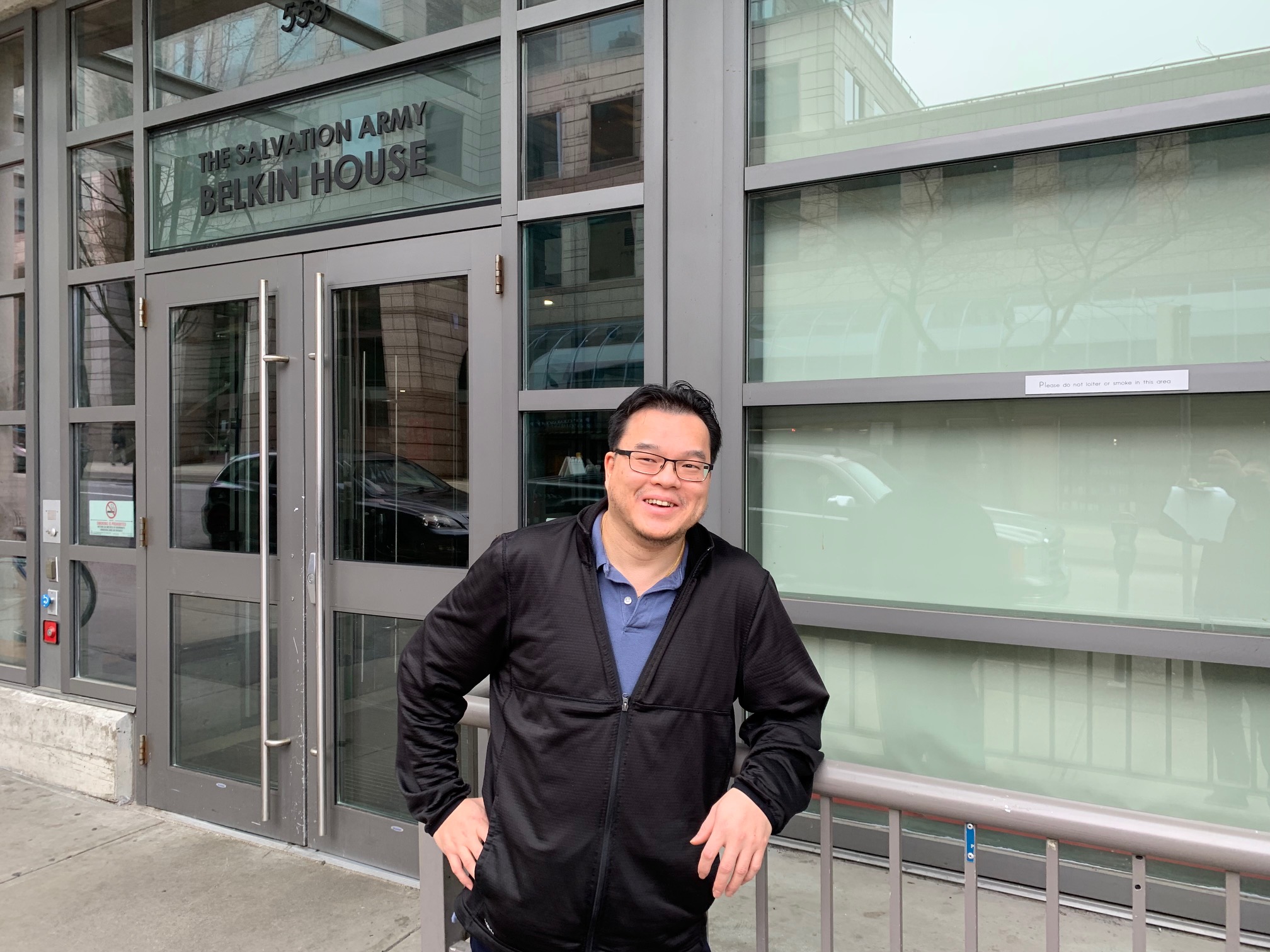 Posted at 23:28h in Hope, Inspiration by alvin 0 Comments
0 Likes

For some of us, a story like this is a lifetime.  For John N, within a span of 1.5 years.  A true story about how God has a master plan for each and everyone of us when we least expect it.

In 2020, John, a Canadian, was working in the US for a number of years already, had dreams of starting a new life.  That’s when the global pandemic hit, everything began to shut down, and John lost everything.  In October 2020, in similar fashion to the movie “Planes, Trains, and Automobiles”, he slowly made his way from Vegas to Seattle and  eventually to the US-Canada border. With little of what he had, made his way across back into Canada and without a home to go to, the Red Cross placed John at a quarantine hotel for 2 weeks.  “I was homeless and the Red Cross gave me a list of homeless shelters to move to.  Since Belkin House was at the top of the list, I called them first and got myself onto a waiting list.  I was told that normally, the waitlist was very long but “luck” would have it, I got a bed right away.  Thanks to the lockdown due to the pandemic, the 30 day maximum stay turned out to be 3 months!”

While he was staying in the shelter, John volunteered a few times in the Food Services Department and applied to the Personal Development Plan (PDP) Program.  As “luck” would have it, “Belkin House took a chance on me and quickly accepted me into the program.” says John.  As a PDP resident, he now had a roof over his head for the next 18 months and Andy was assigned as his case worker/chaplain.  Andy helped John with obtaining a BCID, referral to medical assistance, enrolling in Life Skills Programs, volunteering, and taking a couple of employment training programs that the Food Services Dept offered.  “Thanks to a generous grant through The Vancouver Foundation, I was able to get some Culinary Arts and Barista Training that prepared me and gave me valuable skills for a new career path.  I even got a new pair of work shoes!”

Upon completing some of the mandatory programs, Andy assisted John in posting his resume (that had very little work experience) on some job search websites.  Within a very short period of time, John had received an interview request from a local restaurant. With lack of interview experience, he sought the guidance of Andy.  “He told me to practice in front of a mirror, during the interview, just be yourself and be honest.” says John.  “I forgot about the part of practicing in front of the mirror and did the interview anyways.  By some “luck”, the cafe hired me!” he added.

Soon after starting work, John received another application request.  UBC Food Services came calling. “I went through the application process and sent my resume in.  I never did get a call for an interview.  I guess they must’ve found someone better than me.”  A couple of months went by and UBC Food Services came calling a second time.  “I went through the application process again, sent my resume in again, and this time, they requested for an interview.  By “some luck”, they hired me.”

For the first few months, John juggled two jobs to make ends meet, but an unexpected turn of events at UBC opened the opportunity for a position that offered full-time hours, and better job security.  This helped ease the difficult decision to leave his first gig.

Fast forward to October 2021, just 12 months into his residency at Belkin House.  John had applied for housing with More Than a Roof a few months back and was contacted for an interview.  “I look back at all the great programs that Belkin House offered and the TD Bank Financial Literacy Workshop really got me on track in getting my finances in order.  “Luckily” I had a stable job and financial statements to support my housing application or they may not have accepted me.  I moved in November 2021.”

At the end of the interview, John takes a long….and reflective pause.

“I ended up in the US because I took a leap of faith.  When the pandemic hit and when I was stuck in the US, with just the clothes on my back, I had lots of doubt of whether or not I would make it safely through this uncertainty.  I was lost and I knew I needed to make it back home….somehow.  I know I’ve used the word “luck” a lot but, I truly believe that “Someone” is looking out for me.  That “Someone” is definitely of a higher power.  And that “Someone” led me safely through these past couple of years to end up at The Salvation Army Belkin House, that my case worker was a chaplain, and that where I live today is a faith-based organization.  It would be great if my story gives hope to others.  What I’ve been through over the past couple of years is not “luck”, it’s God plan.”